The Unexpected Risks of Website Design [From the Developer's Perspective]

As a developer in charge of developing websites you are more than aware of the ups and downs of the industry, especially if you're doing freelance work. There are times when you are swamped with a number of projects, while other times you'll take what you can to make sure the bills are paid.

It's in these moments of desperation where you might bend your set of rules and take on a client that deep down you know aren't the type you like to deal with.

Hopefully I can persuade you to stay away from the problematic clients, regardless of the pay. It'll be your guide to sanity and peace of mind. 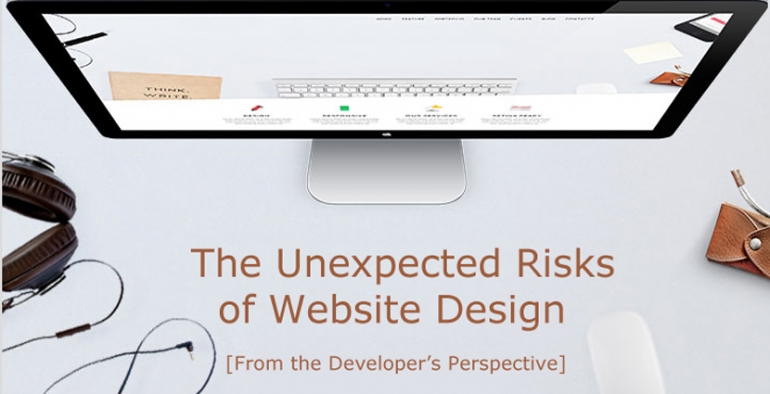 Craigslist is the real culprit in most of these situations.

You're looking for a gig and low-and-behold you find one that sounds interesting within your area. They need a website. They come across as a small business willing to make the investment. They even word the listing to cover some of the basics of what they need.

Then you contact them. Things starts going south. Little things like the need for constant updates, pixel-pushing tendencies, and the most dreaded of all... they'd like to see a good chunk of the work before they decide to pay you for your time.

Get out. Get out now.

A lot of these types of individuals want you to do the heavy lifting, for free, and then run with your idea. You send over a mockup they like (after many revisions), you give them a quote, and they take your design and hand it to the lowest bidder on some freelance site. Ouch.

From now on, demand payment up-front after the entire scope of the project has been detailed. You don't want scope creep. You want the details to be as solid as a business contract so each party knows exactly where they stand during the development process and what needs to be done (like being paid) at the right times. Better yet, just get a contract.

Being too trusting of the other(s)

Let's say you're working with a team on a big web project. There are people from all over the globe because the client decided to break up the work into different chunks for each person to expedite the process. Things may be going well if you're using team collaboration tool but what happens if one of these individuals becomes irate about the project?

You have to be careful with what you're sharing back and forth between the team players. Someone may have inadvertently exposed their machine (or the project files) to malicious code and so if it's all linked through a file sync program (like Dropbox) the entire team could suddenly become infected with malware and viruses.

Do yourself a favor and make your computer secure. If you haven't yet go ahead and get a free antivirus software trial, set it up, scan for any previous problems, and keep it running whenever you're collaborating with others because you never know if they're taking the same precautions as you.

Project creep (as it was previously mentioned) can be a killer for any web development project because it pushes the goal further and further back.

This comes about in small and big ways like:

These type of issues can come up by your hands, too. You might suggest a feature while talking off-the-cuff and suddenly the client wants it and will fight to have it included.

Your best bet is to keep your mouth shut and continue with the original plan. If the client wants extra bells and whistles added, it will come after the main project has been completed and launched. Also, when they want these extras you bet your butt you should charge for them because what you're doing isn't a charity.

Be wary of those clients that seem too rushed or without understanding of what goes on behind-the-scenes of website development. That's not to say they won't fit into those two categories but overall it's probably worth your while to spend the extra day searching for the clients you want to work with than being stuck with one that is a constant pain in the rear. By doing so you'll avoid these three issues and thus save your time and sanity.

Hey all! I’m Alice, I’m a copywriter who is passionate about all things related to web design. Check out my G+ page