The Difference Between UX and UI Design Finally Explained

When I first started designing websites in a professional capacity, I had a very, very hard time figuring out what to call myself. First, I just wanted to get hired. When I went freelance two years later, I wanted people to know exactly what I did.

For the most part, I called myself a "web designer". It was simpler, especially for my small-business clients.

After a while, though, that wasn't enough. I wanted, needed, to call myself something that reflected the sheer amount of knowledge that goes into designing a website well. It's knowledge that goes far beyond aesthetics, and can be used to do so much more than make pretty web pages.

I settled on "User Experience Designer".

The terms, "UI" and "UX" get thrown around a lot. Sometimes, they're used interchangeably; and at other times, a clear distinction is made. For the new web designer, just starting out on their journey to greatness, this can be a problem. They might be asking themselves, and the Internet, things like, "Which one is which?", "Which should I learn first?", or "Should I tell people that I'm a 'UI Designer' or a 'UX Designer'?" Often, there isn't any easy way to decide.

I had this same question when I first started out, and I will not be the last. The answer is, of course, "it depends".

User experience design (UX) is the entirety of the website (or product) that you build. It's how the pages are structured and organized. It's how users navigate from page to page. It's the process they follow to get from "point A" to "point B". The process of designing the user experience can often involve research, interviews, creating user personas, examining the usability and accessibility concerns, and so many other things.

User interface design (UI) is just that: the interface itself. It's the layout, the colors, the buttons, images, illustrations ... everything visual. It's the part of the website that the user actually sees and clicks on.

Essentially, user interface design is just one part of user experience design. It's a huge and important part, to be sure, but not the only part. Most designers do at least a bit of both, and many do it all.

On a team with more than one designer-type, however, one might plan the user experience from a big-picture perspective, while another dedicates their time to obsessing over the visual details. That right there is the big difference. The user experience is how the whole thing fits together. The user interface is how it looks.

So why the confusion?

You have to understand that there's more than one force at work, here:

First, we have plain old ignorance. Some new designers will adopt a title without actually researching what it means. Their clients/bosses may not know any better. People who haven't actually looked the words up may use them interchangeably, not knowing that there is a difference.

Some people may not know what an "interface" is. I'm not kidding. To some people, that word is technical jargon. They have no context for it, so how would they know?

Secondly, people may not get to choose their own titles. In larger organizations, titles might be chosen by management, or marketing, based more on what "sounds cool" than on what their people actually do.

Put those two factors together, and it's no wonder at all that people are often left wondering which way to go.

Alright, so you basically know the difference between UX design and UI design. Which should you call yourself? This largely depends on how and with whom you work. Remember, UX design is a huge job. The one-sentence elist I provided above isn't the half of it.

UX design, as a job description, may include some or all of the following: 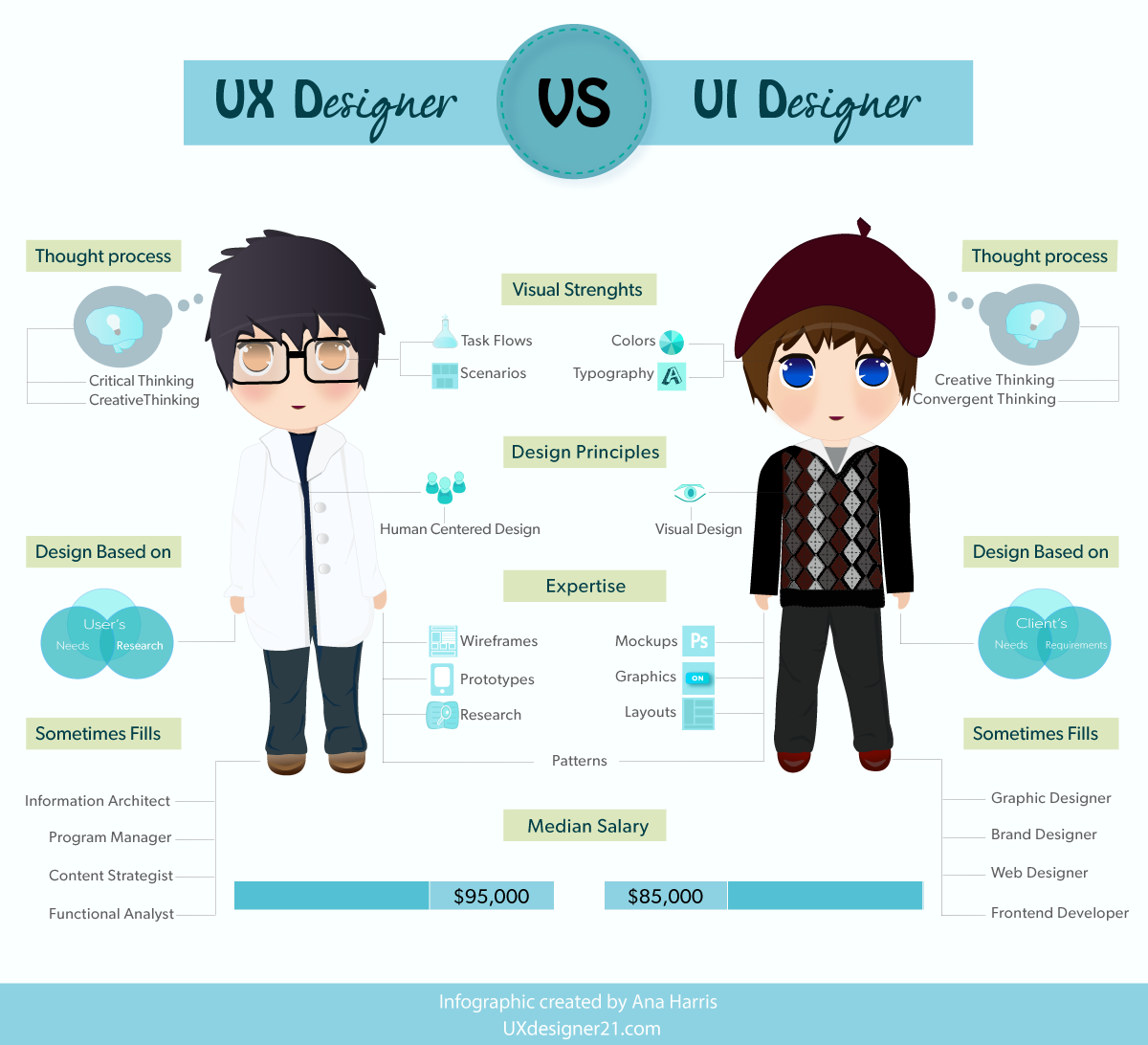 If all you have to do is take the results of all that planning, and turn it into a good-looking interface, you're a user interface designer.

Now don't start thinking that UI designers are any less important. Some spend almost as much time putting the UI together as the UX designers spend on their research and planning. That's good. Attention to detail is what makes the difference between an "okay" website, and one that delights its users.

The point is that if you're a big-picture person, or you generally do everything involved in designing a website, the term "UX designer" probably applies best. Otherwise, "UI designer" works just as well...

Unless Marketing tells you otherwise.

Ezequiel Bruni is a web/UX designer, writer, and aspiring photographer living in Mexico. When he's not up to his finely-chiselled ears in wire-frames and front-end code, or ranting about the same, he makes mouth-watering tacos, drinks spiced rum, reads fantasy novels, and plays lots of video games.